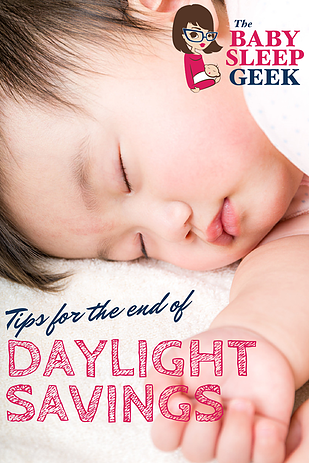 Adults love the end of Daylight Saving Time because it gives us an extra hour of sleep in the morning but our kids don’t see it that way! They seem to think it means an extra hour of morning fun and games! It really pays to plan ahead and help your baby adjust to the time change gradually.

Starting about 8 days before Daylight Savings Time ends, put your baby down for bed 15 minutes later. Keep this slightly later bedtime for 2 nights then adjust again, putting baby down another 15 minutes later. Continue and by November 5th your baby will be going to bed an hour later than normal.

Encourage a Later Morning Wake Up:

You’ll also need to encourage your baby to sleep in a little later in the morning since her body may be up and ready to go at her usual wake up time. To do this, try to leave your baby in her crib 15 minutes later every 2 days. If she naturally sleeps at least 15 minutes later, simply don’t wake her. But if your little one wakes and calls for you, you can go in and use your verbal sleep-time cue like “night-night, go back to sleep” as a sleep reminder. When you do go into her room to get her for the morning, be overly excited and dramatic. This will help to differentiate between a night time check-in where you expect her to go back to sleep and her new acceptable wake-up time.

In order to help shift your baby’s schedule, you also need to shift all those other schedule cues like feeding and naptime. So, on the day of your first 15-minute shift, also be sure to shift naps, meals, and snacks by 15 minutes as well. I find the most important feeding to delay is that first morning feed of the day. But if your baby simply can’t make it, that’s OK. Just start by delaying the next feeding.

If you have a youngerbaby or one who is sensitive and easily overtired, you may need to adjust more slowly using 10-minute increments instead of 15-minutes. Just plan accordingly by starting the gradual shift early.

Have a baby under 5 months?

If you have a young baby or newborn you likely will not need to adjust her schedule at all. Sleep is still disorganized in younger babies and their naps are often not strictly set by a time on the clock. These babies may follow more of a pattern rather than a schedule. As long as you continue to follow your baby’s pattern and sleepy cues she should be able to adjust to the new clock time within a few days.

What if my baby already goes to bed and wakes up too late?

Not many parents have this complaint—but it does happen! If your baby goes to bed later (I consider late anything after 8:00 pm) and is a bear to wake up in the morning, this may be a great time to help her adjust to a more biologically restorative sleep schedule. Instead of trying to shift your baby’s sleep ahead of time, put your baby down to sleep on November 1st at her normal bedtime. When she wakes, it will likely be an hour earlier on the clock. From there, try to keep most naps on time although you may need to put her down a little earlier at first if she’s struggling. This will allow her body clock to fall in line with the clock on the wall. For bedtime, put your baby down about an hour earlier than normal. Remember, she was going to bed too late prior to the time change, but her body will think its bedtime sooner now allowing her to shift to an earlier bedtime and earlier wake up.

Even though we are trying to adjust your baby’s biological clock, we also need to remember that a too late bedtime can backfire and cause an earlier morning wake up. And putting your baby down for a nap too far outside of her sleep window can cause short naps and a cranky baby. So, be sure to watch your baby’s demeanor. If she is really struggling to get to the new bedtime or naptime, it’s OK to pull it back for a few days to help prevent overtiredness. Once her sleep debt is caught up you can work on pushing her schedule later again.

10 Reasons Why Your Baby is Waking Early

10 Reasons Why Your Baby is Waking Early

Subscribe to my e-newsletter and get a FREE copy of my sleep guide! Just tell us where we should send it...

I'll send you an email to confirm that you'd like to receive my e-newsletter. You can unsubscribe at anytime.
CLOSE