All About the 4 Month Sleep Regression 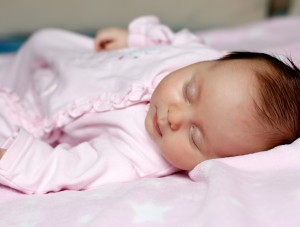 If it’s not a true regression, what exactly is it?

The 4 month sleep regression is a result of a change in the way your baby sleeps.
As a newborn, your baby falls almost immediately into deep sleep. Now, your baby’s brain is maturing and his sleep is becoming more adult-like. Instead of falling quickly into deep sleep, a four month old moves more slowly through the stages of sleep, from drowsy, to light sleep, then to deep sleep. While you can rock your two month old to sleep in 15 minutes, and put him down in his crib without any problems, if you try rocking your four month old to sleep he will likely startle awake as soon as you put him down in his crib. This is because he was still in the light stages of sleep when you tried to put him down. Now there is no more “tricking” your baby into sleep. If you want to continue to rock your baby to sleep, it can take close to 45-minutes before he finally falls into deep sleep allowing you to put him down without startling him awake.

The 4 month sleep regression also changes how your baby wakes in the middle of the night.
After four months of age, your baby also spends more time in non-REM deep sleep. This means that he is more aware of the sensation of transitioning between deep and light sleep. Those normal partial arousals we all experience (even adults wake up to 4 times a night) are now more obvious to him. If he hasn’t had much practice getting from drowsy to asleep on his own, it now becomes a problem. It isn’t that your baby is waking more often, it’s that he now doesn’t have the skills to get back to sleep on his own and is looking for whatever environment or soothing technique that helped him fall asleep at bedtime. This is often referred to as a “sleep crutch”. The absence of those sleep crutches you used to help your baby fall asleep at bedtime, like a pacifier, nursing, or rocking, become more obvious to your little one now. This doesn’t mean that you now need to “cry it out” in the middle of the night, but you probably want to start allowing your baby some space to practice falling asleep at bedtime. Jodi Mindell, a well-known psychologist and sleep expert, states in her book Sleeping through the Night, that if put down awake at bedtime, 80% of children will learn to sleep through the night on their own.

It is also the result of your baby’s changing sleep needs.
Prior to four months, your baby could get by on four or more catnaps each day, occurring at varying times of the day and of varying lengths. By four months, your baby now needs at least 1 longer nap of at least an hour in order to be well-rested.  For many babies it’s the morning nap that has naturally consolidated and lengthened to over an hour or in some cases two or more hours. With the natural lengthening of this nap, the 4th nap of the day is pushed later into the evening. If you continue to try to fit in this later cat nap, but it is occurring much later than 5 pm, it may interfere with your baby’s nighttime sleep, causing a later bedtime, more frequent and earlier night wakings, or an early morning wake-up.

And the four month sleep regression is exacerbated by your child’s new social awareness.
The 4th month marks a major cognitive burst. Your baby is now a very social creature, laughing, cooing, and smiling to get and keep your attention. If you are not protecting his sleep by placing him in a consistent, cave-like sleeping space, guess what? He will now fight sleep for the benefit of interacting with you and the world around him.

The four month sleep regression is not caused by a growth spurt.
I recently read an article on KellyMom about the wakeful four month old. There is a lot that I like about and agree with this article. For example, I do believe that just because your baby slept through the night at 3 months doesn’t mean that he can at 4 months or even 6 months. Babies’ feeding needs change, just as their sleep needs change. But there is a major difference between respecting your baby’s changing feeding needs and encouraging an all-night nursing marathon.

Your baby may likely go through a growth spurt at around this age, requiring more feedings at night, but also during the day. Frequent day time nursing during the four month growth spurt should be encouraged as a way to increase your supply to meet baby’s demand, but nursing every two hours all night long well past the period of the growth spurt (usually no more than 2 weeks) is not sustainable for most parents and not physically necessary for babies. Remember, both moms and babies need at least one chunk of consolidated sleep at night in order to be well-rested. If your baby is waking every two hours, you may want to come up with a plan to drop some of those night feedings.

Not every baby goes through the 4 month sleep regression.
I have seen many babies make it through this developmental phase with little disruption to their sleep. Their parents have respected their babies’ sleep needs from early on and worked hard to establish healthy sleep habits from the start. But even if you are currently mucking your way through this difficult time, there are things you can do to get back on track. My next post will cover some of the most successful tips for working through the four month sleep regression.

Make some changes to get over the hump.
There are things you can do to help get back on track. With a couple of changes you can survive the four month sleep regression!

Feeling lost? Let me help you navigate the four month sleep regression with confidence. Learn more about customized sleep plans and follow-up support to keep you on track.

Subscribe to my e-newsletter and get a FREE copy of my sleep guide! Just tell us where we should send it...

I'll send you an email to confirm that you'd like to receive my e-newsletter. You can unsubscribe at anytime.
CLOSE